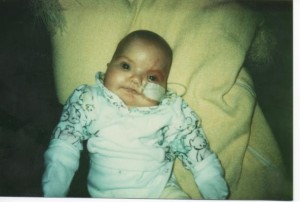 After a complicated pregnancy, Erin was born by c-section on 28th June 2000; My Millenium Baby.

Erin was diagnosed with Wolfhirschhorn Syndrome. A rare chromosome disorder. One third of all babies with this condition die before their first birthday.

From the very beginning we knew she was a wee fighter as she defied the doctors. At 3 weeks old we were told she was unlikely to survive and was baptised soon after.

Three weeks later she was home! Our wee miracle. She had family & friends wrapped around her finger. Her big blue eyes and cheeky smile captivated everyone.

Our wee Cherub became my inspiration. 4 years later I started work, looking after children with complex needs, a job I love. Erin and the support we received inspires me in my job everyday.