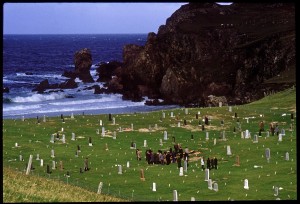 Growing up on the Island of Lewis on the north west of Scotland, the sharing of good food and stories are still part of the tradition at a time of bereavement.

The Over 60s groups in the district of Lochs: the Silver Darlings, Cairdean Cordail and Pairc Social club gathered last November to commemorate Absent Friends. This was an opportunity to dust down the photograph albums, with memories of former members related through storytelling. The event also featured local stories of love, loss and daring deeds, accompanied by music from local artistes.

A memory wall was created featuring poetry and crafts made in memory of absent friends. The poetry included the popular An Fhainne - The Ring written in her native Gaelic by Chrissie MacIver for her mother Marion Mackay. The poem commemorates each crofting implement handled and the people Mrs MacKay reached out to touch and help during her lifetime.

The evening included traditional dishes prepared by the Balallan and District Recreation Association evoking family memories of a fine diet of natural products such as salt fish, oatcakes, crowdie and cream and the traditional duff.

The above picture by Murdo MacLeod from Shawbost, depicts a funeral at Dalmore on the west side of Lewis in 1984. There is a post funeral custom of friends and relatives gathering to share a meal. Family links are strengthened as people travel from a distance to pay their respects and renew the blood ties.