On 30th October 2014, Michael McMahon MSP hosted a lunchtime reception at the Scottish Parliament, introducing To Absent Friends, a people's festival of storytelling and remembrance.

Mark Hazelwood, Chief Executive of the Scottish Partnership for Palliative Care introduced To Absent Friends, within the context of ongoing work to improve people’s experiences of death, dying and bereavement in Scotland. 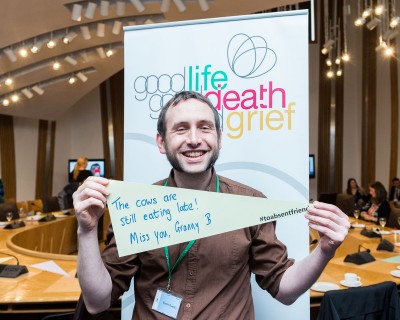 Guests were treated to a presentation by award-winning Glasgow-based photographer Colin Gray, on his latest exhibition: Colin Gray: A journey with his parents through love, life and death. Ron Butlin, poet and writer, closed the event with a recital of his poem A recipe for whisky.

The reception also premiered an exhibition of the To Absent Friends: Essence of a Memory photo competition which ran as part of the Luminate Festival in October. Competition winners were: Under 18s: Emma Fraser; Aaron Hawthorne; Connie Sneddon; Over 18s: Laura Christie & Evelyn Smillie; Alan Dawson; Finola Scott; Morag Ewing

A gallery of all competition entrants can be viewed here: Essence of a Memory photo gallery.

Many guests also shared their own personal tributes to absent friends, which have been made into beautiful and moving tribute wall - view the gallery of tributes here.