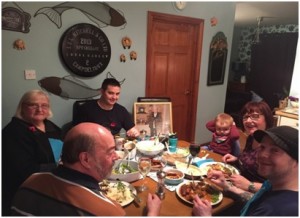 Nannie was born in Wales, however lived in Scotland for most of her years. She met her true love ‘Pat’ Edward Patullo, during the war, him in the RAF, her in the WAAF. They married, settled in Scotland and had 2 children. Sadly Nannie was widowed at a very early age. She devoted the next half century of her life to her family, near and far, and had lots of grandchildren to nurture and watch grow.

Nannie can be remembered for so many things, her theatrical ways, guitar playing, yodelling, poetry, mischief making, bowling, baking, her love of rude jokes and a laugh which sounded like her insides were crumbling! Her loyalty and love she handed out freely, she was proud of every single one of her family and told us all so often. To us, she will be simply remembered as our ‘Nannie’, too many qualities and fond memories to put into words. 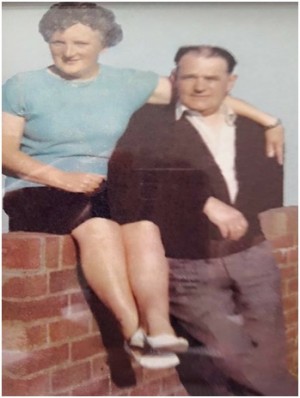 On the 8th November, Nannie’s 96th Birthday, Remembrance Sunday and at the end of the ‘To Absent Friends festival’, we stopped our busy lives and paused for reflection and thanks for our Nannie, all she had given us and what she meant to us all.

At her Samhain Supper we ate her favourite food; bangers, mash and (burnt) fried onions (we drew a line at kippers!), followed by chocolate and more chocolate. We had a dram (or two) and shared our favourite stories of our Nannie. For those further away, we read their poetry about Nannie and made some hilarious attempts at Facetiming 3 ways (it was chaos – just how she would have loved it!). We jacked up an old VCR and played a war recruitment film from the Imperial War Museum, in which she proudly was encouraging others to ‘join up’.

In her final years, Nannie became a little obsessed with winning the lotto, she bought tickets for every draw and told us frequently how she would be dividing the millions between us all . Sadly for Nannie, she didn’t scoop the big prize; however Nannie, rest assured, you have left us with more than money can buy! x