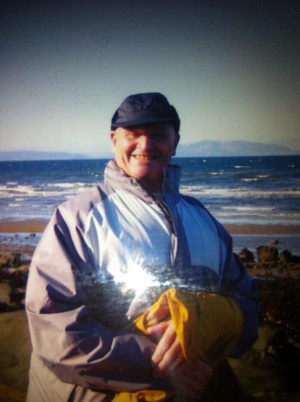 Philip was born in Glasgow in 1934 and lived in the Gorbals until World War Two meant that he, his two brothers and mother were evacuated to Ayrshire. He grew up in Ayrshire and at school met his future wife Patsy. A love that would last a lifetime. In 1960 they welcomed their daughter Jacqueline into their family. Philip believed in the value of hard work and often had several jobs including a miner, a milkman, a gardener and many in between. He loved recalling these stories of cycling miles at night to work in the pit and then cycling back into Ayr and going to mow someone's lawn. He loved people, talking to people and hearing their stories. When I was born in 1980, his only grandchild I was lucky to have him all to myself. At a time when he was still in his late 40's and early 50's he was an ever present, loving and above all active force in my life.

When I close my eyes and think of my Papa, the words that flood my mind are love, authenticity, pride, values and strength. To me he was a giant of a man in every sense of the word - his love for his family, his strength and stability, his love and accomplishment in sport including weightlifting, cycling, swimming and running. He was an active member of the community, always willing to help his neighbours, taking part in local clubs and willing to help a stranger. One day we were down at the beach on a rare hot summers day on the ayrshire coast, my papa noticed a diver in trouble in the distance and swam out to find he was suffering from the 'bends', he managed to swim him into safely pulling him and his full scuba gear and oxygen tanks. Afterwards when he was to be awarded a bravery medal in London, he didn't want any attention drawn to it, as he felt this is what anyone would have done.

But for me he was a guiding influence, his strong belief in the value of education has pushed me in my life to achieve success. I miss him so much every day, but he led such a full life, we are still learning from him