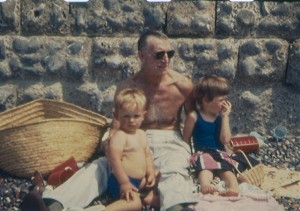 Sidney was born not long after Queen Victoria died and he in turn died around the time the internet and mobile phones were starting to take hold. In the 60s you could have seen his work as a Fleet Street etcher in national newspapers. And during Britain’s darkest hour he was down at the London docks fighting the fires as the Luftwaffe’s bombs rained down around him. But to me he was Grandpa.

When I was a very young kid I would sit on his lap, play with his ear lobe and maybe I’d get an extra strong mint from the jar! He smoked and had a magical mechanical ash tray in which centrifugal force dispersed the ash into a hidden compartment.

In many ways he was an early adopter – a 1966 Austin (in which I was later to honeymoon), home ownership and long distance commuting (he left London and took the train from the Sussex coast each morning). He was always interested in me and valued whatever I was doing.

Each spring, when I grew up and he grew old, I used to dig a trench in which to plant his runner beans. Afterwards he’d ask about what was going on in my life, we’d have a cup of tea and maybe I’d get an extra strong mint from the jar.